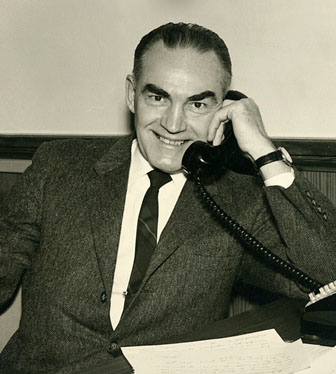 In 1966, John William Musselman was Dean of Rockland Community College in New York when he was invited to apply for the presidency of the new Massasoit Community College to be housed in the Charles M. Frolio School in Abington.

President Musselman was born on March 31, 1912 in Laray, VA. He graduated from Western Maryland College and then went on to receive his doctorate in education from Johns Hopkins University.

Dr. Musselman recalled that, as the first president of the college, he hired all the faculty, allowing him to choose candidates with the best fit for the community college system. Selecting dynamic instructors for the vocational programs at Massasoit was a particularly important task for the new president who invested time in seeking out choice applicants for open positions. Steven Brint and Jerome Karabel state in their book The Diverted Dream: Community Colleges and the Promise of Educational Opportunity in America, 1900-1985, that “Musselman recalled going all the way to California to hire a commercial artist for one new program and aggressively pursuing the director of a prominent private secretarial school in Boston for another.”

During his presidency, Dr. Musselman saw the fledgling college’s first graduation of 137 students in 1968; the move from temporary locations in local schools to the five building campus in Brockton by 1978; and the beginning of programs, such as Latch, that would become the hallmarks of the institution.

After completing his tenure as Massasoit’s founding president in 1978, President Musselman retired to Sandwich, MA and then to Vero Beach, Florida. He passed away at age 89 in 2002. John Musselman was predeceased by his first wife, Harriet Elliott, in 1969. He married Ellen Vallis Lormer in 1971 and was the father of three children.