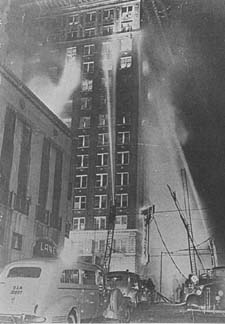 The Winecoff Hotel fire occurred December 7, 1946, killing 119 people and injuring at least 90 more. The Winecoff was a15-story hotel downtown Atlanta, originally constructed in 1912; the building was advertised as "fireproof" due to its steel construction. According to building code regulations in 1912, as a building on a lot measuring less than 5,000 square feet, the hotel was only required to have one stairway. The fire was noticed around 3:15 a.m.; a bell boy had responded to a guest's room service call at 3:10, and, as he attempted to leave the guest's room five minutes later, he found the hallway was full of smoke, trapping him inside the room. The fire department was not called until 3:42. By this point, the single stairway was impassible. The first engine and ladder company arrived within 30 seconds. Fire department ladders were not long enough to reach the upper floors, and many people jumped from the upper windows. The spread of the fire was compounded by wooden transoms above guest room doors; rooms with open transoms readily allowed the fire to spread within. Other factors contributing to the fire's severity were the open stairway (fire doors on each floor would have prevented the fire's upward spread), lack of sprinklers or automated alarms, and combustible interior furnishings.

In this video by Downhome Traces, Sam Heys, author of the book The Winecoff Fire, describes the fire while standing in front of the hotel building.