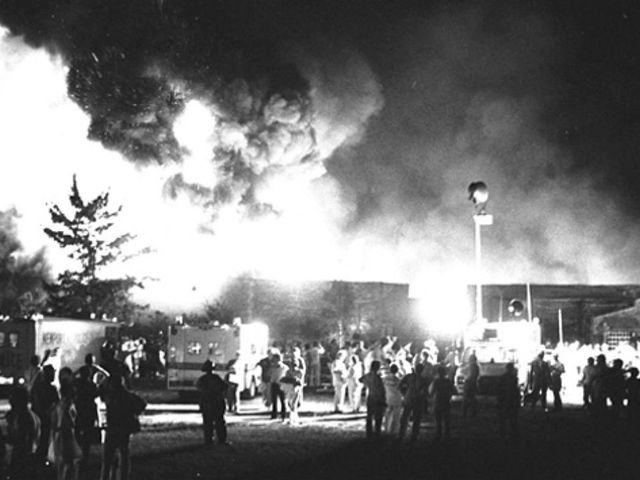 The Beverly Hills Supper Club was a popular upscale venue in Southgate, Kentucky. The fire occurred Saturday, May 28, 1977 on Memorial Day weekend. 165 people were killed, and over 200 were injured. The original building had been expanded multiple times, and the club included multiple restaurant rooms, private party rooms, and two performance rooms, which often hosted nationally-known entertainers. Up to 3,000 patrons and 182 employees were at the club at the time of the fire. The fire's exact time of ignition is unknown. A wedding reception in the club's Zebra Room had ended around 8:30 pm, and some guests had complained that the room was too hot. In 8:56, two waitresses entered the Zebra Room and saw smoke. The fire department was called at 9:01 and arrived within three minutes. The fire spread quickly through the building, reaching the largest-capacity room, the Cabaret Room, by 9:10. Several factors contributed to the loss of life in the fire, including overcrowding, insufficient fire exits and a confusing layout, lack of sprinklers and an automatic sounding alarm, lack of firewalls, hazardous electrical wiring, and lack of oversight and enforcement by the local authorities.

This is a news report from WCPO News of Cincinnati from the day after the fire. It includes helicopter footage of the burning club, a short statement by one of the busboys, and footage of the makeshift morgue.

This video was taken by Eastern Kentucky University fire science faculty after the fire. It shows the ruins of the club.