Major American Fires: Our Lady of the Angels School Fire- 1958

Our Lady of the Angels School Fire: Introduction 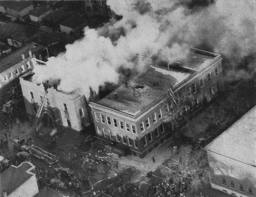 The fire occurred the afternoon of December 1, 1958; 92 children and 3 nuns died as a result of the fire. Our Lady of the Angels was a Catholic elementary school in the Humboldt park community in Chicago. The oldest part of the building had been built in 1910, and renovations and expansions had occurred since then. Due to the "grandfather clause" in the city's fire code, the building officially met safety standards, even though it did not have the safety features required of modern buildings at that time. The fire began some time between 2 an 2:20 pm in a trash barrel in the basement. The fire traveled upward via a stairwell; a thick door on the first floor blocked the smoke from entering, but the smoke easily traveled into the second floor corridor. The school's fire alarm had to be manually activated and was not connected to the fire department. The fire department was not called until 2:42 by a housekeeper from the rectory next door. The lack of sufficient exits, building design flaws, inadequate evacuation procedures, overcrowded classrooms, a lack of sprinklers and heat-activated alarms, and the sheer height of the second story windows from which many children jumped, which were 25 feet off the ground. The fire inspired great change in school safety regulations, and thousands of older school buildings were brought up to code in the year following the fire.

This video, provided by the Chicago Fire Department, includes footage of the fire as well as comments by Retired Captain Richard Scheidt, who was one of the firefighters who responded to the fire.

This video, by the Chicago Tribune, includes photographs and video of the fire as well as recollections by a victim's family and a photographer who was at the scene of the fire.